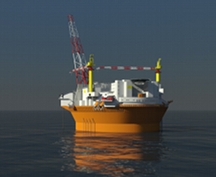 Leading offshore rope manufacturer, Lankhorst Ropes Offshore Division has been awarded a contract by Eni Norge AS to supply the polyester rope mooring lines for the Goliat FPSO (Floating Production Storage and Offloading). The Goliat FPSO will be positioned 85 km offshore, north west of Hammerfest in the PL229 and PL229B licence areas in the Barents Sea, offshore Norway.

Given the weather conditions in the Barents Sea, and relatively shallow water depth, the Goliat FPSO will use a semi-taut leg mooring system to limit movement of the FPSO. The mooring system comprising of three clusters with two clusters having longer lines to the prevailing weather, together with the sea bed chain, will provide the lateral restoring force needed to keep the production vessel on station during operation.

In order to minimise the potential damage of trawl wire impact, Lankhorst Ropes is developing a trawler wire resistant rope jacket for the polyester rope lines. The jacket will be an integral part of the rope construction during manufacture at Lankhorst offshore rope production facility in Portugal.

The FPSO’s mooring systems will feature in-line buoyancy elements. Manufactured by Lankhorst Mouldings, the buoyancy elements secured on elongated shackles have an uplift of 19 T, and will prevent the polyester ropes from touching the sea bed.

Commenting on the award of the Goliat FPSO mooring contract, Chris Johnson, sales director, Lankhorst Ropes Offshore Division, said, “We are delighted to have been chosen by Eni Norge AS to supply the mooring lines for Goliat. This is a challenging project, and one which will demonstrate Lankhorst Ropes’ commitment to setting the standard for offshore mooring through the quality of both our ropes and technical innovation.”

The PL229 and PL 229B licensees are Eni Norge AS and Statoil Petroleum AS with Eni Norge AS as the field operator. The delivery of the mooring rope and buoyancy elements from Lankhorst is scheduled for early 2013.