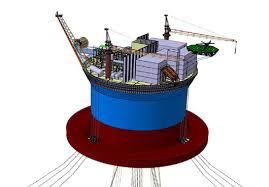 Given the weather conditions in the North Sea, and relatively shallow water depth, the cylindrically shaped FPSO will use a semi-taut leg mooring system. It will be moored with 14 polyester mooring lines in three clusters of 4, 4 and 6 lines at 250m water depth. Two clusters will have longer lines to the prevailing weather that, together with seabed chain, will provide the lateral restoring force needed to keep the production vessel on station.

The Gama 98 polyester rope tethers are made from high efficiency, parallel laid sub-rope cores within an outer braided jacket. During manufacture all of the sub-ropes are monitored to ensure they all have equal tension and length, ensuring a 100% torque free rope.